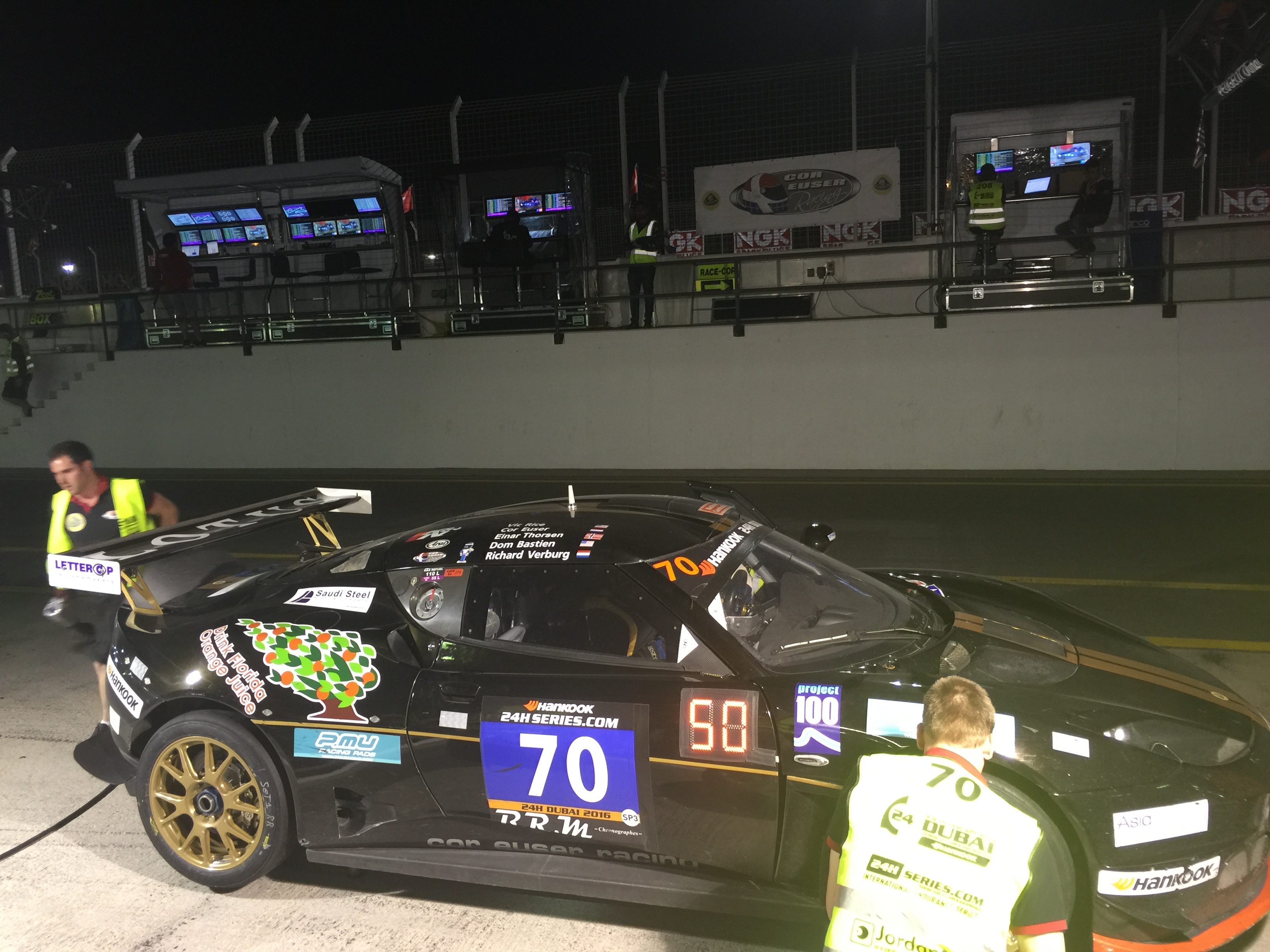 Respectable effort, but no podium finish at 24H Dubai 2016 Cor Euser brought his Lotus Evora GT4 to the 24HDubai with high expectations. The 2015 season finale in Brno had shown that the pace and durability was there, and only a small electrical gremlin had gotten in the way of a fantastic end of year result. Having secured a fine driver line-up with Vic Rice (USA), Dom Bastien (USA), Richard Verburg (NLD) and Einar Thorsen (NOR), his premier mechanics crew Eloy Garcia Castillo, John Kristof, John Meijers, John Reedijk and Khan Shah, and filled the shipping container with essential spare parts, what could go wrong?

The car ran like clockwork during Wednesday and Thursday practice and qualifying while the drivers got faster and more confident with the car and track. Qualifying had seen Cor put the car in P6 with a good run, so obviously there were other fast cars and drivers in Dubai.

Cor took the start as usual, and in just half a lap had advanced to P2! Once the Code 60s started, and there were many of them, different pitstop tactics meant that track positions no longer accurately reflected the standings, but we nevertheless were more than happy to see #70 as P1 in the SP3 class for a while!

Einar Thorsen was our second driver, and although new to the car he put down steady and acceptable laptimes in between the many Code 60s he had to be part of. Our first unscheduled stop came towards the end of his stint and was caused by a failure in the gearbox system, but was quickly fixed.

Next driver was Dom Bastien who drove into the long Dubai night and being inexperienced with night driving and new to both car and track, put safety over bravery and brought the car back in one piece. Then Richard Verburg took over and we could witness an outstanding performance where laptimes were very close to Cor’s daylight times and we climbed on the ranking getting back into contention. Then it was Vic Rice’s first turn in the Lotus. He and Richard were actually double-starting on a Speelover Porsche so Vic had already driven a daylight stint there. Again we could see how it matters to have experienced night-drivers as fast-Vic was continuing the climb up the rankings.

Unfortunately, a technical gremlin decided to strike and in the next 8 hours we had several unscheduled pitstops all related to a failing fly-by-wire throttle system. Eventually we ran out of spare parts and could not avoid declaring a DNF result. The 24H Dubai is a hard race and this time we could not celebrate a podium finish there. However, we had a great time and learned a lot, so we will be back!

For more details, please have a look at Einar Thorsen’s race report.